Many beekeepers will tell you ants only clean up a dying hive, rather than cause its death.  But they don’t have EyesOnHives.  Check out what we saw after moving an otherwise perfectly healthy hive:

Do cinnamon sticks prevent ants from attacking a bee hive?

Placing cinnamon sticks is an often recommended method of deterring ants, at least online and in beekeeping clubs. You can see we placed some cinnamon sticks near the hive, and the ants seemed to magically disperse!  A little more subtle was that the sun also came up.

Check out what we saw the next day, with the cinnamon sticks right out front of the hive.

Cinnamon fails to deter ants on the second day of the test.  You can see the ants are pulling bees and even brood out of the hive.  It’s scary stuff.

This showed us that the ‘cinnamon effect’ we thought we observed on the first day was actually likely more related to sunlight.  These ants seem to like attacking the hive overnight.

Argentinian Ants – a Nightmare for Bees

It’s worth mentioning that these ants are the notorious Argentinian ants which form a global supercolony.  This means that unlike most ant species which happily fight among themselves, these ants work together as if they were part of the same colony.  Bad news for bees, since the numbers of ants putting pressure on the colony can truly become relentless.

We’re in the range of the ‘California Large’ colony which stretches for over 560 miles along the coast.

Clearly the cinnamon sticks are ineffective, but fortunately there’s another way.  Below you can see pie tins with ‘oil moats’ inside.  There’s a block of wood between the tins to create a space, and then some vegetable oil in the gap.  It’s very effective, and fairly low maintenance.

Bee vigilant with your ant defense!

A few days after I first ‘perfected’ my veggie oil based guards, I was horrified to find a big ant invasion. Couldn’t believe my design could have failed so hard – but then I saw the enabling twig – subtly standing up from my garden like a middle finger from the ants…
The tanglefoot idea is awesome, I really like the idea of the inverted guards too, as my veggie oil feet do kill my bees, and it seems like poor form to leave such a bee hazard around.  I had some success reducing the risk with mesh, but tanglefoot and good guards sounds like a great upgrade!

Other ideas for ant defenses – tanglefoot and diatomaceous earth

Including things like tanglefoot in your ant defenses can help give an added layer of protection, but unfortunately tanglefoot is also pretty messy.  It’ll get on your bee suit, and eventually something like a blade of grass or leaf will stick to it and form a new ant bridge.

Diatomaceous earth is another interesting idea – you could try putting a line of it on the ground around the hive.  It’ll potentially work until the wind blows, it rains, or you accidentally step into it while inspecting your hive.

How effective are the moats?

My take on oil moats for hive stands is that it’s pretty effective.  Once you have the oil moats in place, the ants are stopped, and you feel good for helping your bees.  It’s certainly worth checking in on the hives through EyesOnHives, or a quick glance for new ‘ant bridges’ either due to dead ants, leaves, or even dead bees in the pan 🙁

How to make one!

The basic model in the video above works pretty well, just get some pie tins, and some blocks of wood that fit in them.

My next version is going to use bean tins with veggie oil, sitting in larger soup tins with ditomaceous earth, with an inverted cup over them with tanglefoot inside.  Here’s what’s in my head: 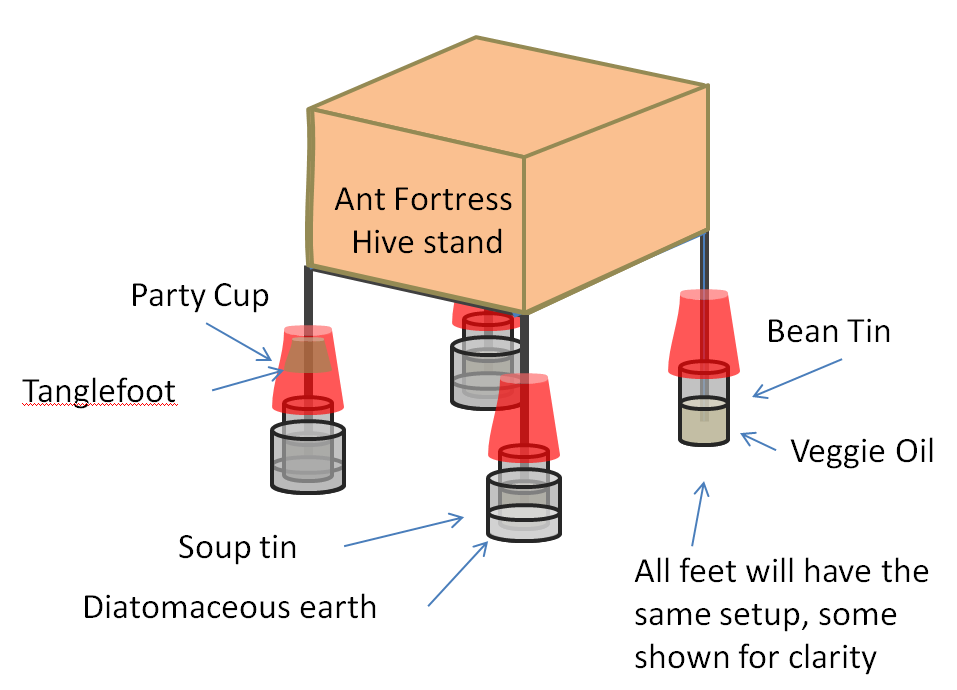