Read up and make plans

I’m excited about becoming a beekeeper!  I read about it all night – looking at different hive designs, wondering if I can make a Langstroth frame myself with reclaimed (non treated) wood, reading up on regulations (SB city is very bee friendly), people’s experiences, Africanized bees etc.
I like honey, and I also like the idea of having a bee hive.  Apparently a productive one can produce 60lbs+ (~25kg) of honey a year – hope it can all work out.
I was reading a book called ‘The year 1000‘ (about England) a little while ago.  Back then honey was the only natural sweetener around, and if a swarm of bees arrived on your property, it was considered one of the greatest good fortunes!

Get buy in and the support of your stakeholders

Spoke with my landlord this morning, and outlined the options and informed him of the details I have learned from the SBBA group and family/friend resources.
He was quite OK with the idea of getting a bee hive, and is also aware of the current plight and importance of honeybees.  I explained that I’d keep him in the loop on the project and send him links on beekeeper experiences in Santa Barbara.
He was happy that I wanted to get the bees out of the garage wall, and impressed that other people in downtown Santa Barbara who are part of the SBBA keep bees too.  Even said that he is interested in seeing how it goes and becoming a beekeeper himself.  Very encouraging!

Get your own beekeeper support network

Here’s what my Dad had to say –

The longer you leave it the harder to get them to transfer to a hive and the more comb that needs to be removed from the shed.
You need to get a hive with frames and starter comb (and someone with a bit of bee knowledge and protective gear, smoker etc), remove a timber plank or three and gently remove the combs with bees on them (and hopefully the queen) and place them into the hive with enough space between them for the bees to have temporary access.
Then partially cover the hive and if the queen has been taken across then all the other bees will follow -do the job  before mid afternoon so that returning bees will find it and go into the hive.
Once settled into the hive then the lumps of comb can be removed and the bees gently swept off them back into the hive.
Check re licenses etc as there are a few bee nasties to be managed.  Leave hive as close to the original site as possible for a few days then move it to intended site -suggest the opening faces what you intend to be their flight path.
Getting them out of the wall is not a safe or sensible job for a beginner and the landlord would need to be aware of what is going on and be OK with it.
Once you have a hive, its needs ongoing management, separation of brood from honey using a queen excluder, and gear for extracting honey.

I’m very fortunate that several of my friends and work colleagues (who new?!) are accomplished beekeepers, and have offered to help out this newbee too!
Please share any further guidance you have, I’ll keep posting to this thread with updates too. Thanks again to Steve for welcoming me to the group!
Edit: Here’s a process in hindsight outlining some of the good steps: 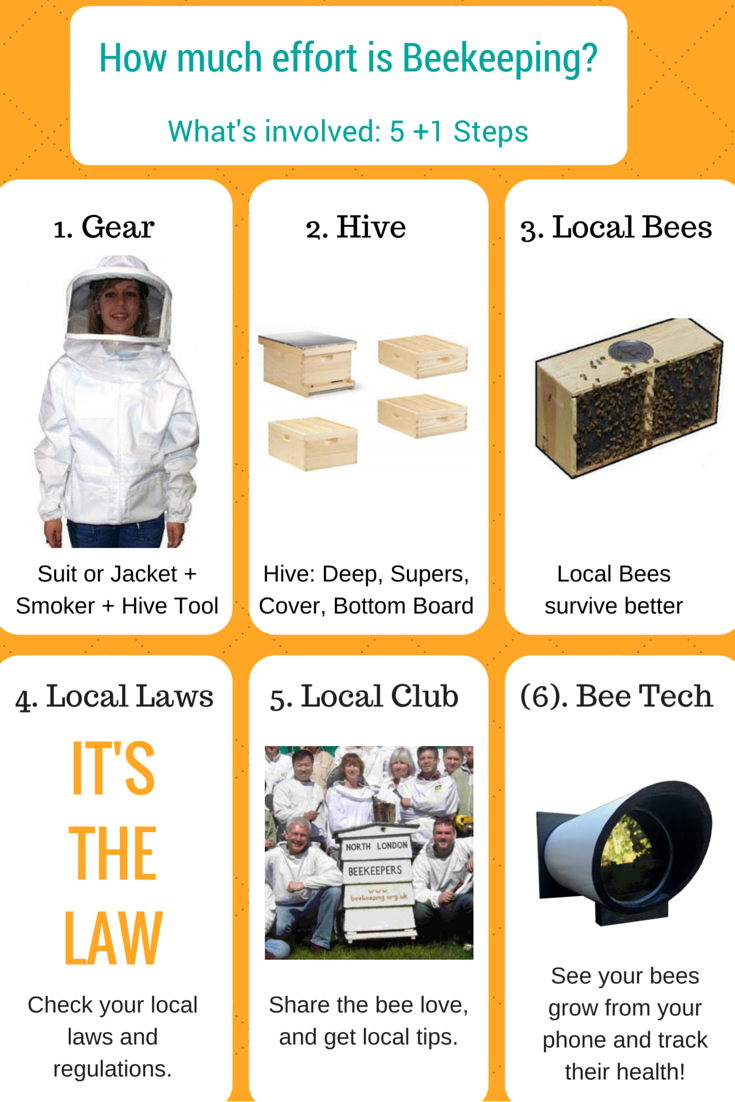 2 thoughts on “Becoming a Beekeeper. Getting Started”