Over the last few days I’ve been keenly watching the bees over breakfast every morning, and relaxing after work in the evenings strumming a little acoustic guitar from my chair near the hive.

My neighbor is an elementary school teacher and is quite entertained by this – apparently she wants to write a children’s book after telling her students about ‘the bee keeper who sings to his bees’.
Trying to observe and learn everything I can!  It’s a whole new world for me, and quite a surprisingly complex art.  I just started learning about queen rearing and hive splitting, but I’m just scratching the surface.
Today was something of a turning point in my bee journey.  Thanks to Kate’s recommendation, or perhaps just the truly supportive community of beekeepers here, I was very fortunate to have been contacted by SBBA’s very own Paul ‘The Beeman’ Cronshaw!  As I’m sure you all know, he’s a teacher professionally, is a caretaker for many of the hives in Montecito, and an all around interesting guy!   Paul offered to inspect my hive and offer suggestions on my next steps.
Jumping at the chance, I caught up with Paul over the phone this afternoon, and learned he was down the road in SB right then.  Sneaking away from work, I raced home and into my bee suit.
When he arrived, Paul casually threw on a bee jacket and brought a mask, asking if I had prepared smoke.  I had.  We chatted briefly and had a look at the garage retrieval remnants, and the few stragglers still there.
After seeing my quietly buzzing colony, with neither gloves on, nor even the mask, he began to lift and inspect the frames with the ease of a master.

An inspection for the Queen

On some of the frames we saw bees had stored some nectar, others pollen.  Paul showed me how to see under little clusters of bees on the comb with a quick whoosh of breath dispersing the top layer of bees.
This was bare faced, from just a few inches away from the frame – I watched from the safety of my full bee suit with zipped, velcro’d mask, with hands behind my back slightly nervous I wasn’t yet wearing gloves…
As a little black beetle crawled over the top of one of the frames I learned I had a hive beetle, and that they would be similar to hive moths, and eventually could destroy a weak colony.  Might have been a newcomer since i’d frozen the frames before putting them in, I forgot to ask.
The wooden frames were of good quality, and some of the comb received top marks from Paul.  He prefers natural beekeeping wherever possible, and was less of a fan of plastic frames, although there was good comb on some of the plastic foundation.
The ant defenses and hive stand frame were also met with approval. As we went through to the last frame, Paul confirmed what my gut felt, but I’d still hoped wouldn’t be the case – there was no Queen.

Queenless Hives and What to Do

The bees were behaving less organized and more jittery apparently to what should be happening, and there was also no brood on any of the combs.  I showed Paul all the comb that had been drawn in the garage wall that I’d taken out a few days before and left in the hive. 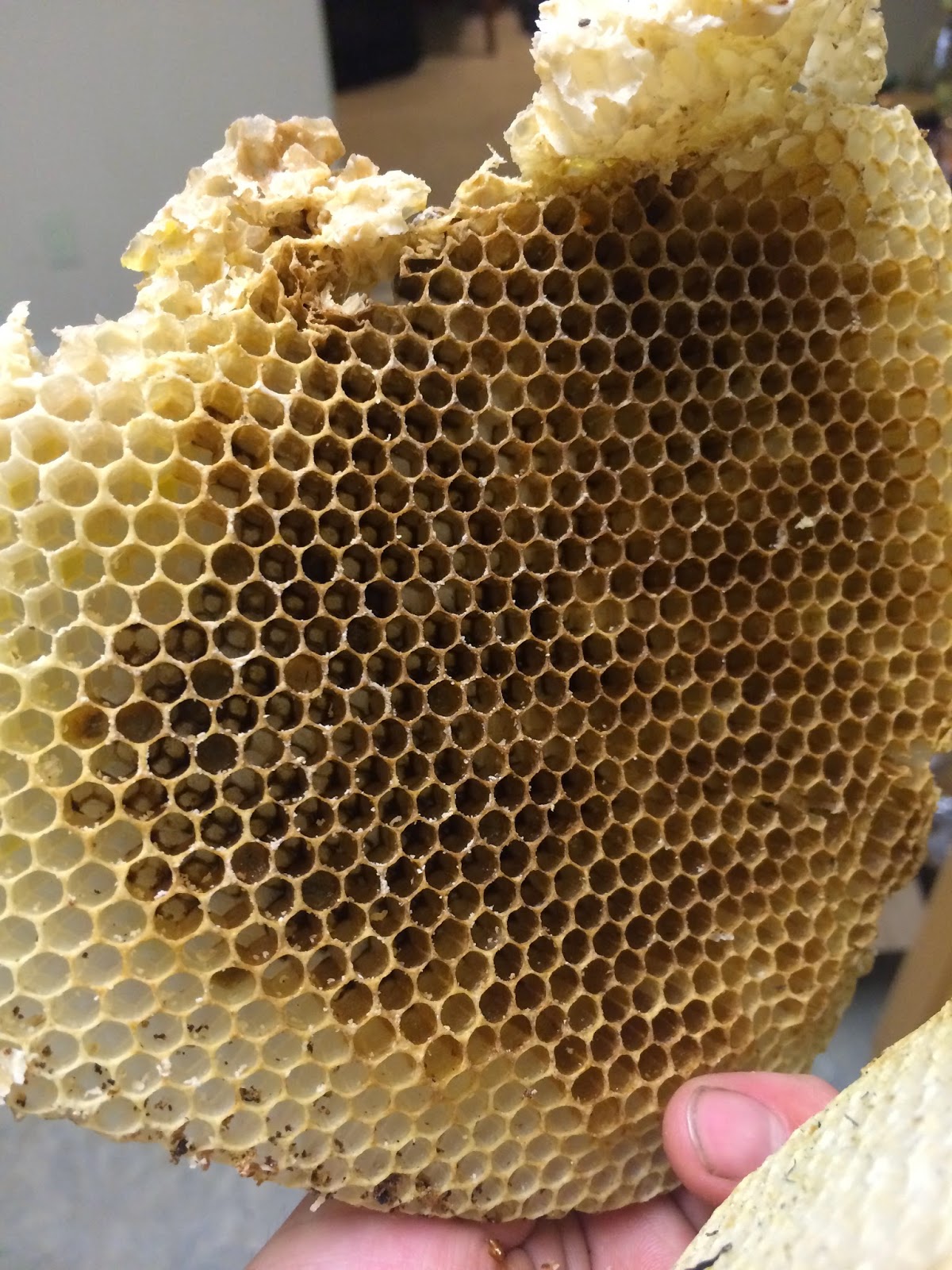 There was only old completely empty brood cells, based on the dark marking of the comb.  It’s possible I scared off the queen during the transfer, but also possible she’d already moved on while i’d been away, or swarmed off again after I applied the smoke.
I guess the rescue succeeded for most of the bees, but unfortunately not for one particularly special bee.  Poor bees!
They had become so nice and gentle the last few days – even letting me rescue some of the stragglers still landing on the garage at night by getting them to crawl onto the end of a twig, then climb into the hive for warmth.  I’m so tempted right now to put the old comb back in and hope something magic happens… sigh!
Paul generously offered to get me re-started with a merger of another small colony which my bees would most likely happily accept and assimilate with.  There seems to be plenty of food available still in my area, so he thinks they’ll likely make it through the winter.

I’m reading about a lot of other bee keeper’s experiences, and realizing there’s a lot of ways to mess up, including having or causing a queenless hive.  But giving up on beekeeping is really the one that has beekeepers like Paul the most worried.
I’m excited and hopeful about the merger colony transition, and hope the new bees are of a similar temperament.
It’d be awesome to have happy bees in my yard, making honey and pollinating the garden, and also give the remainder of my colony a queen and growing colony to be part of. 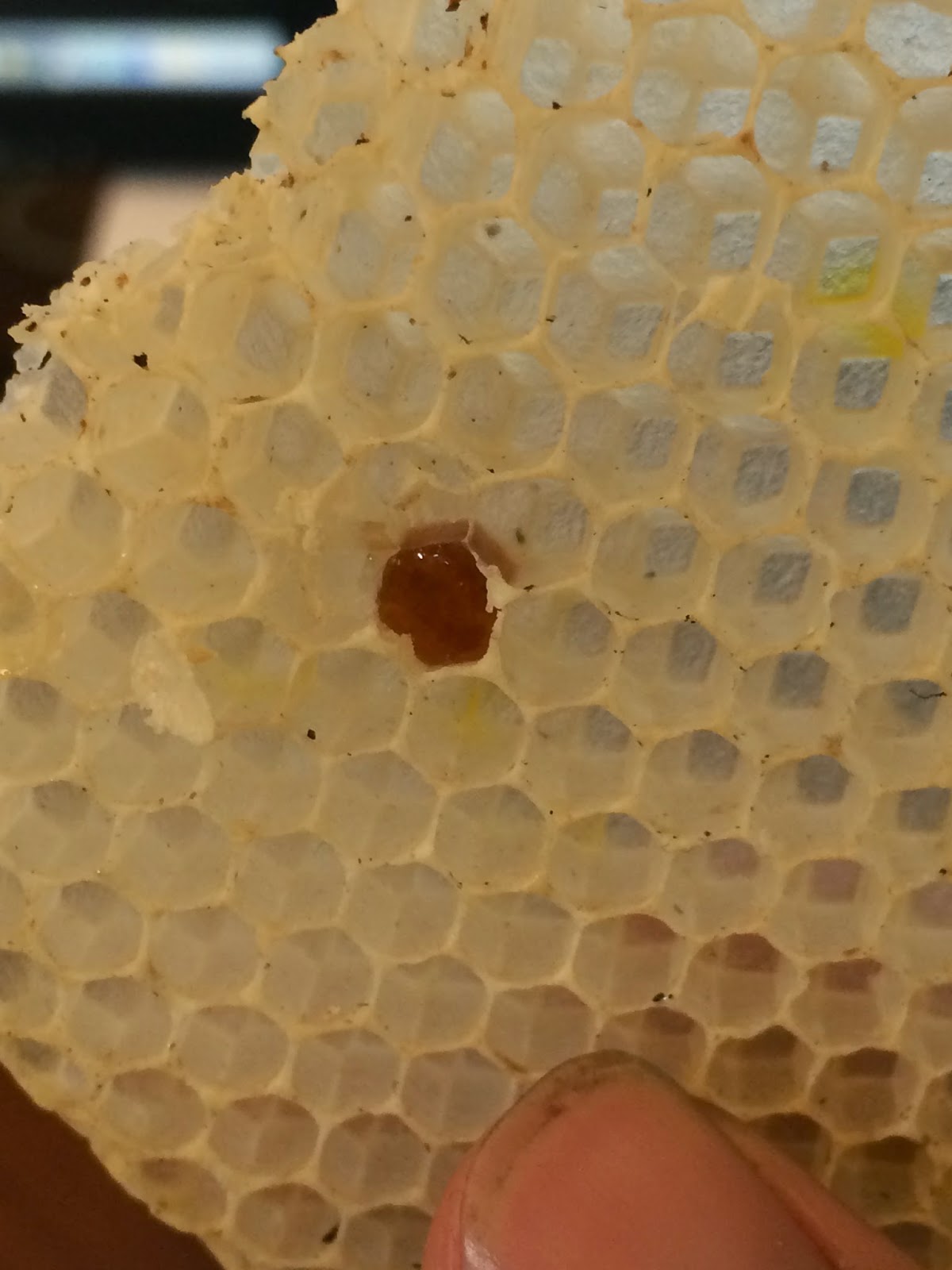 I’m also going to clean up the other hives in the hope there’s a chance to retrieve any another wild hive/swarm successfully in the future.
What an experience.  Journey onward.